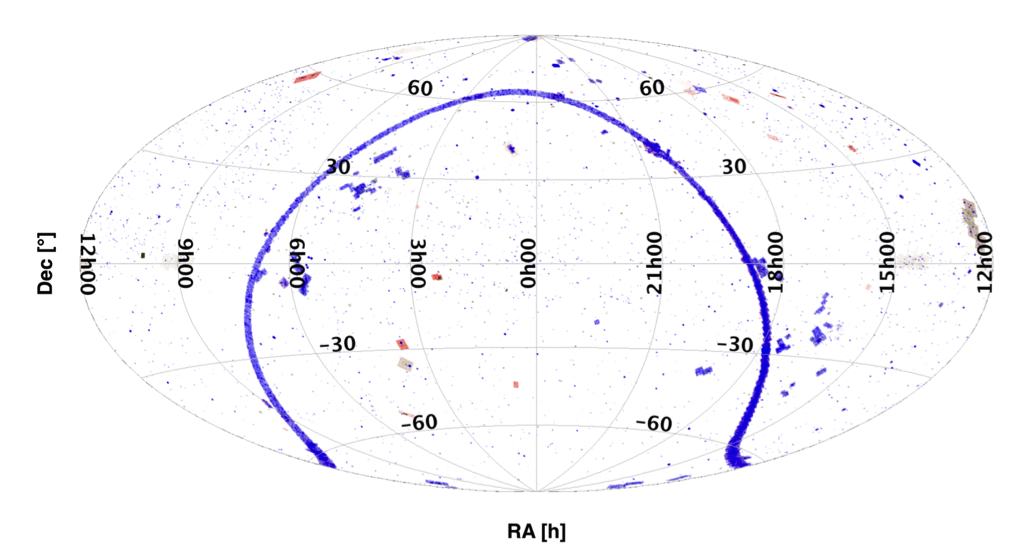 The first version of the Herschel/PACS Point Source Catalogue (HPPSC or PPSC), containing more than half million entries distributed among the three PACS bands, has been released on 17 May 2017.

The catalogue has three major tables, one HPPSC table for each band, provided as compressed comma-separated value format files. Two additional tables are provided in the same format: one is a list of slightly extended sources (HPESL) and one is a rejected source list (HPRSL). Links for each table can be found below::

For your convenience, you can also perform queries around a particular position in the sky using the Catalog Search Tool for Herschel data available from NASA's Infrared Science Archive (IRSA).

The PACS instrument onboard Herschel mapped ~8% of the far-infrared sky. The broad-band filters were centered at 70, 100 and 160 μm, allowing an angular resolution of 5.6ʺ, 6.8ʺ and 11.3ʺ, respectively. A total number of 14 842 PACS maps were searched for our catalogue sources, which were obtained for 430 unique observing proposals, all performed by standard configurations, but with various science goals.

The HPPSC pipeline performed source extraction and photometry in a systematic and homogeneous way. This procedure was followed by a strict quality check that preferred reliability over completeness. Our primary goal was to collect sources that had an appearance similar to the instrument PSF. These criteria are mostly satisfied in regions where extragalactic sources were targeted. But Herschel also observed the entire Galactic plane to provide data for a better understanding of star formation. The vast majority of sources in star forming regions are, however, slightly elongated. These sources are published in our Extended Source List (HPESL). Also, many sources were found to be poor quality and unreliable, and not satisfying one or more of our criteria. These detections are collected in the Rejected Source List (HPRSL). We note that HPESL and HPRSL are not part of the high reliability HPPSC. For all entries the relevant observational identifiers (OBSID) are listed, and users are encouraged to check the corresponding maps in the Herschel Science Archive. In addition an Observation Table provides ancillary information about the 14,842 obsids involved in the catalogues generation.

The construction procedure, the content and validation processes are detailed in the HPPSC Explanatory Supplement. We emphasize the importance of the Explanatory Supplement in allowing users to perform valid scientific studies with our Catalogue. As the Catalogue was derived from far-infrared observations, the Galactic cirrus emission is a major limiting factor in photometric accuracy, completeness and reliability.
Please read the Cautionary Notes carefully in order to be aware of the caveats of the provided products.